By Christian Apthorpe11th February 2021 No Comments

The consumption of content has changed quite a bit over the years. From its origins on cave walls, to the formation of language and writing, to print, then analogue, digital, virtual and now hybrid. Not to mention a myriad of formats in-between.

From a brand perspective, it started around the 1800s where businesses began talking to customers and wanted to provide useful information. Fast forward to the 1990s… and the internet came along. Blogs were born. Social media took over. Video was crowned king of content. In 2021 the content landscape is now a dizzying rabbit-hole of multichannel formats.

Bill Gates once wrote that ‘Content is King’. He wasn’t wrong: Content marketing is now more valuable than ever, costing much less than traditional marketing and generating many more leads. Let’s take a look at how content is evolving right before our eyes.

WordPress is the leading content management system used to build websites. Their users alone produce about 70 million new posts… each month! So saying that your content has to stand out online is an understatement. One way of doing this, is to turn your content into an exclusive online experience. 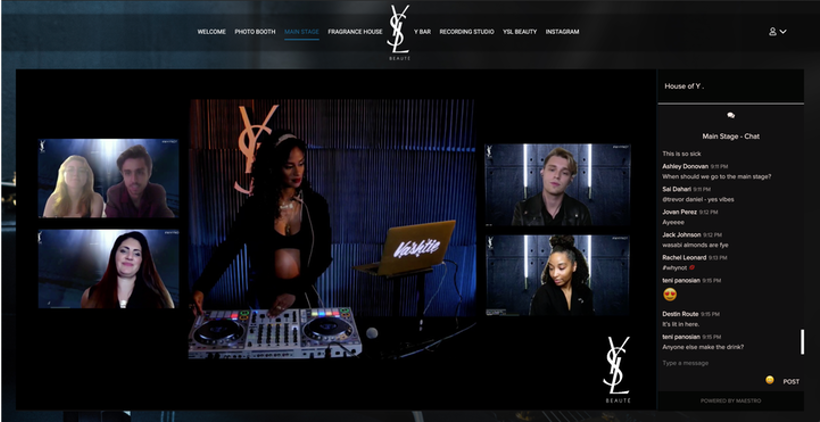 During New York Fashion Week, YSL Beauté introduced Lenny Kravitz as the new face of their Y fragrance through a luxurious virtual gathering, that kept guests engaged with a mix of creative content and interactive experiences. As well as a live interview with Kravitz, a series of virtual rooms hosted live performances as well as other hangout opportunities. 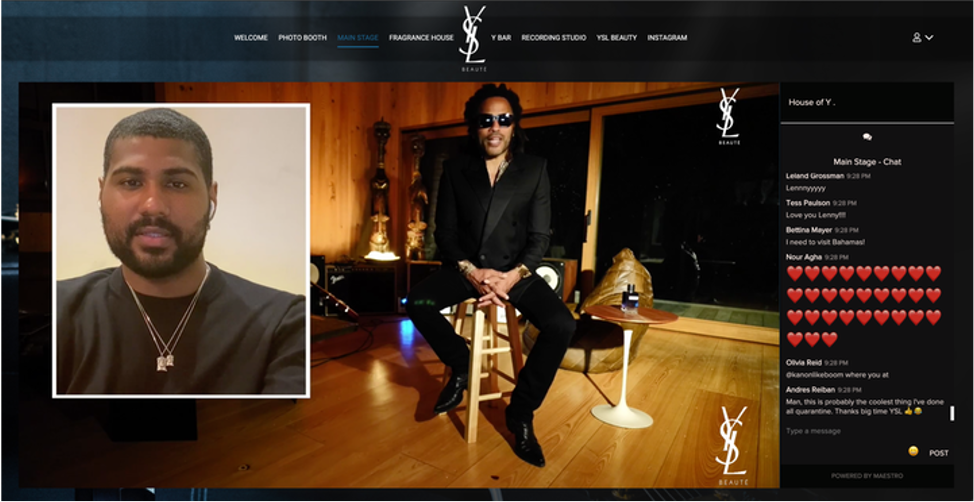 As soon as guests entered the site, they were directed to a customizable virtual photo booth — the first of several interactive experiences. New content was then regularly unveiled every 15 minutes, making sure they had their audience’s attention. Guests were encouraged to learn more about the fragrance through a mysterious “fragrance house” tab.

Platforms such as Twitch (3 million concurrent viewers at any time), Animal Crossing: New Horizons (23+ million copies sold) and Fortnite (86+ million players), have proven to be very popular for everything from company meetings, to film screenings and talk shows. With more and more brand applications emerging, these environments are going to be prime real estate for getting content in front of an entirely new kind of audience in the next few years.

Wendy’s leveraged the gaming world to market its product and brand values in a brilliant display of initiative. To remind Fortnite audiences that Wendy’s serves the freshest beef to its customers, they created a “Wendy” avatar who went on a freezer-slaying rampage. And it caught on like wildfire. Other players joined in. Social media mentions went up by 119%. In the end, the stream saw 250,000+ viewers tune in for a whopping 1.52 million minutes.

This quick thinking not only allowed the brand to engage and interact with a new audience in an unforgettable way, but hugely amplified Wendy’s company values, brand, and live stream to the masses.

You know when the President of the US utilises a gaming environment to help win an election, it’s time to start paying attention. The ex-vice president of the United State’s campaign trail took a different approach to the usual in-person rallies (due to social distancing measures) and cropped up on Animal Crossing to get his message across. After successfully launching yard signs, Biden’s team have now released a line of virtual swag for supporters.

The swag is actually a virtual replica of merchandise available in the real world and seeks to raise awareness by informing potential voters that may not be otherwise engaged.

While we’re on the topic of games… As you can see from the following examples – gamification is a highly effective way of getting audiences to engage with content and brand messaging. It’s all about dopamine and the human body’s reward system. It’s how we learn and retain information. These principles aren’t limited strictly to gaming either: Incentives and gamification can be used to increase engagement with all kinds of content, whether that be online or IRL.

L’Occitane en Provence, a natural beauty brand, wanted to go beyond simply writing on its website about sustainability and built an online game to reinforce its principles, while educating players on environmental friendliness.

The seed planting game taps into the parental nature of users to leave a lasting impression of the brand as the go-to for natural beauty products. Check it out here.

Fashion giant Balenciaga has released a video game designed specifically to presents its fall 2021 collection. dubbed afterworld: the age of tomorrow, the bespoke video game is set in the year 2031 and sees players choose an avatar and take it on a hero’s journey, imagining a near future in which clothing is meant to transform over many years.

Of all the recent evolutions in content, augmented and virtual realities are perhaps the most advanced. Until recently their applications haven’t been fully realized; but that’s all changing now. Brands understand that they can make content not just more widely accessible, but more memorable when they harness the power of AR and VR. In 2020, there are 1 billion AR users alone and this is expected to triple by 2022. That’s 25% of the world’s population.

Snap have just released Local Lenses – a new feature that is “one of the first ever persistent, large scale, collaborative uses of augmented reality”. Launched in London’s Carnaby Street for now, it promises to transform whole neighbourhoods into digital canvases. The first Local Lens is called City Painter and lets you spray fountains of paint above the street’s shops. Visible to all with Snapchat, users even can battle to cover the shops in their colours.

What makes this so impressive is that it works from any angle (rather than a fixed area like most AR triggers) and when you do something to this environment, it remains in place for others to see. Even if you leave the experience.

Snap claims that there are one million+ existing AR lenses which have been used billions of times, and over 75% of their users interact with AR every day. So, as the camera improves, so will the applications, from advertising to live experiences. City Painter represents a step towards the development of a ‘mirror world’.

Sometimes a brochure or video just isn’t going to effectively get your message across. To help showcase their new business class cabin features, ANA created a virtual reality tour so that audiences could understand what it’s like firsthand. Not only a creative solution, but a practical one, it meant that more people than ever could experience the unique features and comfort of one of the largest business class seating areas in the world.

Once “inside”, users could get to grips with the new seat’s features using intuitive hand control to explore the cabin, order food, change lighting conditions and watch an inflight movie. Very impressive stuff.

As you may have noticed, there’s a lot of AR activity going on in big tech. Facebook, Snap, Google, Amazon are all throwing their hats (or glasses) into the ring. World Brush is one of many similar experiences that lets users create content in an invisible world for others to discover. This means there are opportunities for brands to hide content all around its audience in plain sight!

Check it out for yourself here.

Boursin created a VR experience which took users on a multi-sensory journey through a fridge to showcase its products’ flavour profiles, food pairings, and recipe ideas. While the VR instalment was part of a live experiential marketing campaign, the rest of us can get a taste of the virtual experience with the 360 video above.

Lowe’s decided to help out first time homeowners and recreational DIY enthusiasts with a virtual skills-training clinic that guides participants through a visual, educational experience on the how-to of home improvement.

Check out this interactive graphic novel where a powerful blend of imagery, sounds and interactive effects, make for a gripping reading experience.

See if you would be able to make the right choices in this informative interactive story here.

Delve into the surreal world of animated series Rick and Morty with this creative website, which allows you to explore its content as if you were in the cartoon itself.